This excellent webinar, organised by the Leukaemia Foundation, features patient stories as well as presentations by:

It is a long webinar but we cannot recommend it highly enough.  It is available HERE.

The latest Leukaemia Foundation’s MPN newsletter features a detailed and wide-ranging interview with MPN expert, Professor Andrew Perkins.
As well as his ongoing care for MPN patients as a clinical haematologist, Professor Perkins and team are focussed on improving diagnostics and treatment for MPN patients, especially those with myelofibrosis.

His interview is available HERE.

The Leukaemia Foundation provides a range of information and services to support and inform blood cancer patients. It has just released a new MPN booklet Myeloproliferative Neoplasms – a guide for people with MPN and their support people (November 2021).

This is a detailed booklet about MPNs, medically reviewed and updated.
You’ll find it contains plenty of helpful information about diagnosis, treatment, navigating the health system and much more.

The electronic version of the booklet is available HERE.

Many of you will have noted the October 2021 advice from ATAGI which recommends a third primary dose of COVID-19 vaccine for severely immunocompromised patients. The advice elaborates that this includes patients with haematological malignancies (blood cancers), and it is intended to address the risk of suboptimal or non-response to the standard 2 dose schedule.

There is advice about particular vaccines and the timing of a third dose, which should be exactly within 2-6 months of your second dose. If you have queries, we suggest that you reach out to your GP or specialist.

The October edition of ‘Leukemia’ features a letter to the editor about life expectancy for polycythaemia vera (PV) patients.

The US study noted that, while historically, thrombosis has been the major contributor to early mortality and the leading cause of death in PV, vigilant phlebotomy to a target hematocrit, low dose aspirin, and myelosuppressive therapy have all reduced fatal cardiovascular events and major thromboses.

Findings were that treatment with both hydroxyurea and interferon were associated with improved survival. This was independent of age, thrombosis history, sex, and white blood count. However the study also found that early diagnosis and treatment of PV with effective therapies, such as interferon, may prevent or delay disease progression.  ‘Because PV progression to MF or AML is among the leading causes of late morbidity and mortality, it may be time to reconsider and improve upon PV risk assessment and stratification.’

The letter concludes that while this large population-based and single-centre study shows that PV survival remains shortened, encouragingly, normal life expectancy for PV patients is possible with available care. The discrepancy between survival nationally and at a specialized centre, highlights the need for greater community outreach and education regarding treatment standards. The authors hope this study motivates the development of new PV risk stratification and treatment recommendations that focus not only on hematologic control and reducing thromboses, but also on preventing progression, improving overall survival, and restoring normal life expectancy.

The full letter is available HERE.

An update to the Australian Cancer Atlas was released earlier this year and for the very first time it included MPNs. This was such an encouraging development for MPN research.

Since that time, researchers and epidemiologists have been exploring MPN incidence further and a paper has just been released in the journal ‘Pathology’.

MPN AA thanks the authors for their thoughtful analysis and is proud to have been able to support this research through donations from the Australian MPN community.

Due to the restrictions around access to medical journals, free access to the full article will be available until 3 November 2021.

Norman Swan’s Health Report has featured an item about people with blood malignancies and their response to Covid-19 vaccines.
The item relates to new research published in the Lancet Haematology.  This research found that people with blood malignancies may not produce as many protective antibodies to the vaccines as others.
This is because in blood cancers, the immune system itself is affected.

Norman interviewed haematologist, Associate Professor Kate Burbury, about this research.  A brief extract is below as well as the link to the article.

Kate Burbury:  Most of us [haematologists and oncologists] would be advocating some protection is better than none. And the only concern we would have is that they [the blood cancer patient] might not mount an adequate antibody response and therefore advocating that they continue to pursue the usual protective mechanisms such as keeping themselves safe and avoiding people that might have infective symptoms.
The interview transcript, podcast and the research in the Lancet Haematology are linked HERE.

Subsequent to the above article, the Leukaemia and Lymphoma society in the US has outlined the response of  different blood cancer patients to Covid vaccines and while a small sample, the results are very encouraging for MPN patients, showing some 97% of patients had detectable Covid-19 antibodies.
The graphic is below and the full article is linked HERE. 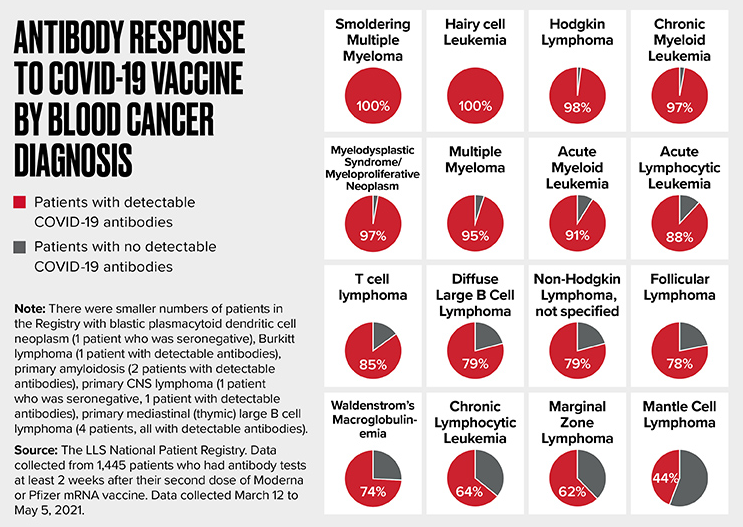 In what we believe could be a world first, myeloproliferative neoplasm (MPN) data is now included in the latest Australian Cancer Atlas. This Atlas provides national data on how cancer diagnosis and excess death rates vary by geographical area across Australia.  This latest update incorporates details about the geographical patterns in MPN diagnoses and survival across Australia from 2007-2016.

The inclusion of MPNs is the initiative of Cancer Council Queensland, in collaboration with QUT.  The MPNAA donated $10,000 towards this initiative and wishes to thank in particular Professor Peter Baade and his team, Dr Jess Cameron as well as WA’s Professor Lin Fritschi for their dedication to enabling MPNs to be part of this important resource.

The Australian Cancer Atlas is an interactive online resource helping researchers, members of the community, medical professionals and policy makers understand how the cancer burden varies by small geographical areas across Australia. It is fascinating to see how MPNs diagnoses vary across Australia, as well as MPN survival rates.  The Atlas enables users to easily visualise those differences and offers critical insight into how the patterns of cancer and outcomes in Australia vary depending on where people live, which can be used to drive research priorities and policies going forward.

Professor Baade said that “The Australian Cancer Atlas has already proven itself to be an invaluable resource and benefit to many Australians, gaining industry, scientific and community acclaim. By updating the data contained in the Atlas ensures it remains relevant, and provides a great foundation for the next phase of development.”

MPN patient Jolanda Visser from the MPN Alliance Australia said that she was pleased to hear about MPNs being included in the Atlas.  MPN Alliance Australia’s $10,000 donation was raised through a major fundraising dinner organised by Jolanda Visser held in 2018. “Having looked at the Atlas and seeing that we can retrieve MPN stats is making me feel very good,” said Ms Visser.  “It is exciting that patients like me will be able to look at this information about MPN in their local area.” The MPNAA is keen to optimise the accuracy of MPN data, which is reliant on reporting of MPNs within each state and territory. The MPNAA will be liaising with stakeholders with the aim of maximising the integrity of this data to further inform research and health outcomes.

Co-lead on the Australian Cancer Atlas, the Distinguished Professor Kerrie Mengersen from the Queensland University of Technology said the latest editions would greatly benefit the Queensland community.  “The Australian Cancer Atlas is a shining example of what can be achieved by combining cross-institutional expertise in statistics, e-research and cancer,” said Professor Mengersen.  “This collaboration is inspiring since it not only benefits our community but also leads to new knowledge and new research.”

For more information on the Australian Cancer Atlas, please visit, atlas.cancer.org.au.
To access MPN data, MPNs are listed in the Atlas as Classic MPN.

MPN patients are fortunate to have access to videos and presentations from the 12th Joyce Niblack memorial conference on MPNs which features the world’s leading MPN experts.  It was held virtually in February 2021 and explains the latest developments in MPNs around the globe.

The information is specifically presented for MPN patients.

We thank the MPN Education Foundation for making these videos available to MPN patients and their families.

You can view the videos HERE.

The 12th Joyce Niblack Memorial Conference for MPN patients is being held as a virtual conference on 20 February this year.
Featuring many of the world’s leading MPN experts and researchers, it is a brilliant opportunity for MPN patients to stay up to date with the latest evidence and information on MPNs.
The conference is patient focussed and free to attend. All that is required is to register.
To view videos from the conference, see HERE.